Transformative changes are taking place in the market for silver but no one seems to notice. While the price has struggled for the last few years, factors around supply and demand are creating an environment that could explode in 2016.

From surging demand for industrial applications to factors around inventory holdings and huge economic risks, a picture is being created that will repeat the price surge of the early 1980s in silver.

1)  Silver is much more than just a precious metal 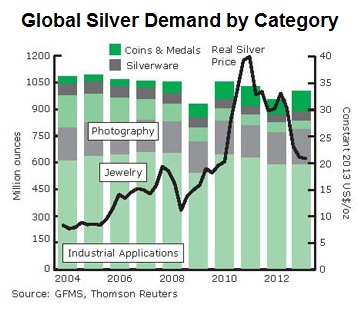 The reason silver is so widely used when cheaper metals might also suffice is for the metal’s special properties. Silver is one of the most electronically conductive and thermally conductive metals available. There are few better metals for electronic applications and silver usage in medical equipment is soaring along with the industry.

Growth in silver demand for industrial use is expected to increase 14% over the next three years to 2018 according to The Silver Institute. While it may not be runaway growth, constrained supply means it could be a huge boost to investor sentiment and prices.

2) China is Buying Up Massive Rights to Silver

Nobody is talking about what could be the story of the decade in silver, that China is quietly positioning itself to corner the market. The right to buy silver through futures contracts has surged on the Shanghai Futures Exchange (SHFE). Trading for silver futures on the SHFE was less than 1/8th the volume of trading on the New York Comex in 2012 but had soared past any other futures exchange by 2013. 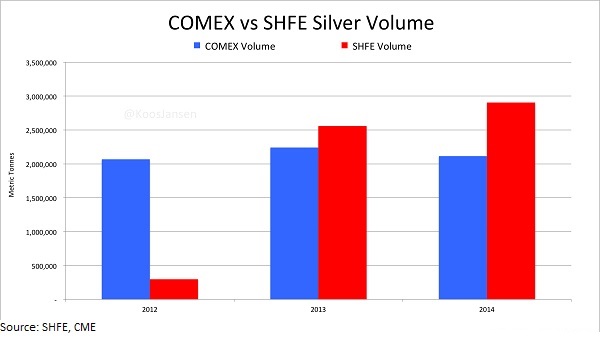 In fact, the Shanghai exchange has accounted for half of all silver trading over the last few years. Nobody knows yet what the Chinese are planning on doing with their control of the silver market, whether to hold silver off the market and force the price higher or to keep it strictly for their own industrial applications. Either way, it will dramatically change the market over the coming years.

3) Investors are Taking their Silver out of Storage

Extremely large holders of silver, banks like HSBC and JP Morgan, use COMEX warehousing to store their holdings. The facilities track holdings for clients and the inventories can be used to settle futures contracts, transfer to other clients or withdrawn.

While inventories of some precious metals have been increasing, silver inventories are plummeting. COMEX reported more than 180 million ounces of silver were being held just after the beginning of the year. Inventories have been climbing for years and it’s been a big factor in price weakness.

When prices start to rise, short sellers will need to buy back their positions quickly. The decrease in inventory will lead to a massive shortage and send prices surging.

4) Silver in Storage will Put Investors on Edge

That’s all changed and exchange traded products (ETPs) now hold nearly all the warehoused stock of silver. ETPs and other investment vehicles have been net buyers since 2005, holding a large supply off the market.

Investment vehicles are not likely to drop their inventories as prices start rising on multiple other factors. ETPs have been buyers even as prices have fallen and need to wait for much higher prices to book returns.

As prices rise, other parties could come back to the market and inventory demand could surge. With no sellers and only buyers, price will need to increase exponentially to persuade ETPs to sell.

5) Silver Miners are about to Shut Down

Cash costs for producing an ounce of silver have hovered between $9 and $10 for the last couple of years. Keep in mind that production costs are just part of the all-in costs to operating a mining company which means that producers are making the slimmest of profits if any at all.

Silver prices averaged around 200% over cash costs over the six years through 2012 but are now just 140% of the cash costs. The drop in gold and silver prices has already forced miners to severely cut back on investment spending back into the company and will soon force many mines to close outright.

Not only will many producers be closing their mines but production at remaining mines will likely be falling through 2016 and over the next few years. Mining is a very capital intensive business with a long time-horizon from land development through actual production.

Mining companies have been cutting their budgets for capital spending since 2012, spending tens of billions less on exploration and development. While we’ve only started to see the effect of the drop in spending, the decline in supply is likely to start coming through in 2016 and 2017 production numbers. For long-time precious metals investors, it is always a sign to get back into the market and a little funny that the rest of the market is always surprised by how fast supply falls after years of lower investment spending by miners.

7) Silver Prices have a Long Way to Go

History shows that it doesn’t take much to see silver prices boom. It took just five months from late 1979 to early 1980 to send silver prices from $6 an ounce to more than $48 per ounce.

If you adjust those numbers by the consumer price index for inflation, silver has the potential to shoot to $144 per ounce. Not only is the potential there for incredibly higher prices but the metal has rarely been cheaper on an inflation-adjusted basis. 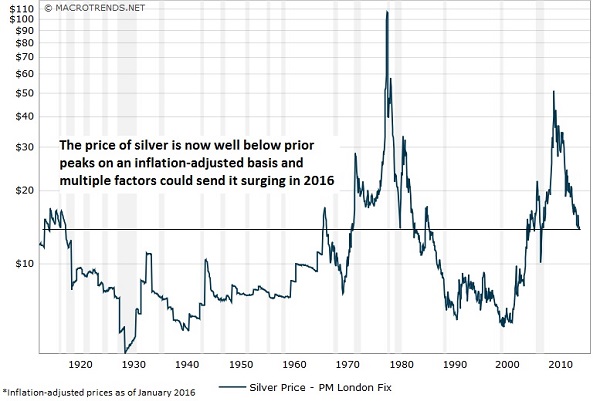 Inflation soared in the emerging world last year, as high as 15% in Russia and well over 10% across parts of Latin America and the Middle East. The only reason prices have not risen as quickly in the developed markets like the United States and Europe is the effect of falling oil prices in the reported numbers.

The Bureau of Labor Statistics reported December 2015 consumer prices rose just 0.7% over the year. This was met with relief by the Federal Reserve which thinks it can hold off on higher interest rates and by consumers who think inflation is under control.

What most people didn’t see within the data was that energy prices fell by 12.6% over the year and masked rising prices across the rest of the economy. The cost of non-energy services jumped 2.9% over the 12 months and hospital services surged more than 4% higher. Not only is the real rate of inflation higher than anyone knows, it is about to go even higher as energy prices rebound.

The price of oil hit a 12-year low recently but will jump this year on lower production and higher demand. When growing energy costs start to add to the reported inflation numbers instead of acting as a huge detractor, people will see exactly how fast inflation is rising.

9) This One Fact Could Cause the Economy to Collapse

Seeing inflation for what it really is will be a huge shock to the markets and the Federal Reserve. As part of its mandate to control pricing pressures, the Fed will have no option but to raise interest rates quickly to slow the pace of inflation. This will choke off what little economic growth economists are expecting, currently just 2.8% according to the World Bank.

As the economy falls into a recession, investors will rush to the exit on the seven-year bull market and stocks will crumble. The only protection from melting financial assets will be in real assets like silver and other precious metals.

10) Not all that Glitters is Gold

Gold serves a lot of the same investment purposes as silver. Both are true stores of value and safety against market crises and the outlook for gold prices is good through 2016. A lot of investors look at the similarities and choose to invest only in gold.

Even if you ignore some of the specific factors that could send silver prices zooming higher next year, there’s at least one reason investors need a position in silver: diversification. While the prices of silver and gold are often compared and generally rise in unison, it’s never a good idea to hold just one investment vehicle. Holding a position in both silver and gold spreads your risk while still benefiting from the upside in both metals.

The price of silver has fallen this year but built strong support around $15 per ounce. Several factors are lining up to drive prices higher in 2016 and investors should seriously consider putting silver in their IRA accounts ahead of the move.