Life is too short to spend it regretting the decisions you made but it seems we all look back sometimes and wish we had done things differently. Making the most of your time and doing the best you’re able can help avoid a lot of life’s biggest regrets but financial regrets in retirement are starting to come forward as the Baby Boomer generation retires.

Fortunately, there’s still time to avoid the five biggest financial regrets in retirement. With a little research and planning, you can have the retirement you deserve without worrying about what you should or shouldn’t have done.

Biggest Financial Regrets #1: Didn’t save enough or spent too much

Are you living with golden shackles around your ankles? Are you spending money you don’t have on things you don’t need…to impress people you don’t even like?

The average American saves just 5.5% of their income, even less than the 8.3% average over the last four decades. Trying to keep up ‘appearances’ by buying fancy cars and lavish homes is a big reason the median saver in their 60’s has just $55,807 and just over $150,000 in their 401k retirement account.

You don’t necessarily need to be saving vast sums of money every month but the problem is that most people don’t know how much they should be saving. We aim for arbitrary rules like saving 10% of income but these beliefs have nothing to do with your personal financial goals.

Instead of trying to save a random percentage of your income, figure out how much money you’ll need to meet your retirement needs. Work backwards from there with a modest rate of return to figure out how much you should be saving to avoid one of the most common financial regrets.

Biggest Financial Regrets #2: Didn’t save as much as I could on taxes

We fixate on investment analysis and other means to eke out an extra percent or two in market returns. After all the effort to chase investment returns, the average investor earned just 2.6% annually over the decade through 2013. Market returns of 7.6% annually on the S&P 500 over the period were not much better.

Investors love to break their backs over investment returns but will do everything to avoid learning the best way to save money on taxes.

With tax deferment, deductions and company match programs, the money you save through retirement account contributions is the easiest you will ever make. Even if your company only matches $0.50 on the dollar within its 401k program, that is an instant double-digit return.

Diversify your taxes in retirement by holding assets in both a traditional IRA and a Roth IRA transfer. You’ll get the immediate benefit of deductions now and tax-free withdrawals in retirement. 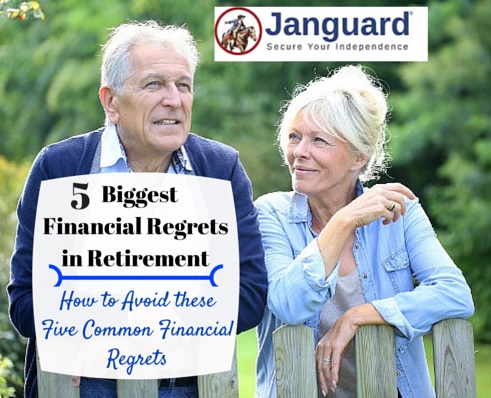 The Employee Benefit Research Institute found in its 2014 study that pension and retirement plans hold more than 84% of their investments in stocks and bonds. Just 14% of retirement assets are in alternative investments with just 4% in real estate and 2% in commodities.

The allocation to stocks has worked out just fine over the six years through 2015 but ask anyone that had planned on retiring in 2009 if they have any financial regrets about diversification. Even bonds are not the safety investment they once were as rising interest rates start to weigh on fixed-income prices.

An investment in gold and other precious metals will not only outperform stocks during the coming market crisis but will provide valuable safety in diversification.

Biggest Financial Regrets #4: Relied too much on Social Security

This one seems ridiculous to me but my mom admits one of her biggest financial regrets is relying too much on social security for retirement expenses. With the average benefit just $1,335 a month, I’m not sure how anyone would think that social security would provide enough to live on.

It’s been convenient for the government as it cut benefits and asked for larger contributions that people thought social security could provide for more than just the bare necessities. It helped hide the fact that social security was never meant to provide much of anything for the majority of people and that promised benefits were unsustainable over the long-term.

When looking over your retirement goals and what you’ll need to cover expenses, don’t count on much from social security. Benefits haven’t kept up with inflation and the government will need to cut payments to save the system. Take control of your own retirement and plan on having enough without relying on social security.

Biggest Financial Regrets #5: Not taking care of my health

No amount of retirement savings is going to make up for a lifetime of unhealthy habits. Beyond the possibility that you won’t live long enough to enjoy your retirement, poor health could crush your retirement plans as medical costs pile up. People 65 and older on average spend 12% of their income for healthcare, nearly 72% more than the percentage spent by the general population.

Taking care of yourself means avoiding one of the biggest financial regrets in retirement as well as just living longer to enjoy your golden years. A long-running study by Nurse’s Health found that changing to a diet high in fruits, vegetables and beans lowered the risk of heart disease by 25% and saved $830 a year in associated medical costs later in life.

Following these five ideas is about more than just having enough to meet your retirement goals, it’s also about not having financial regrets in retirement. You’ve got enough in life to worry about and there will always be decisions you would like to make over, don’t let your finances be one of them.