The 30-year time bomb in the bond market is about to explode, taking the entire financial system out for the second time in a decade

When Detroit filed for bankruptcy on its $18 billion in bonds in 2013, the largest bond default in the nation’s history shocked the financial system. Now Puerto Rico is getting ready to restructure its debt, at $72 billion and four times the size of the Detroit fallout.

And that is just the tip of the iceberg of what will become the next great financial crisis. Central bank manipulation will force debt in Japan to nearly three-times the nation’s GDP by 2020 and U.S. debt will be nearly the size of the entire economy.  The $39 trillion U.S. bond market and the $82 trillion global debt market, could be a 30 year time-bomb ticking down to zero.

At a fifth the size of the nation’s economy, the coming crash in the municipal market alone could take the rest of the financial system with it. As local governments find they are unable to burden tomorrow’s generations by issuing more debt, the entire financial and political structure could collapse from the inside-out.

Why? Because global central bankers have manipulated the world’s financial system for 30 years but are running out of room. Over three decades, central banks have pushed interest rates lower in an attempt to juice economic growth and ensure their own political gain. Keynesians, who believe the economic theory that monetary manipulation can affect the economy, are quick to argue that monetary authorities should lower rates to support growth in tough economic times.

If that were the case, why have rates not been increased during robust economic growth?

The fact that long-term rates are still above zero for the three economies above hides the fact that short-term rates were pushed into negative territory in four regions over the last year. The eurozone, Denmark, Sweden and Switzerland all recently issued bonds with a negative interest rate.

When there’s nowhere left for bond market rates to go

The problem with all this is that the 30-year Ponzi Scheme perpetrated by the Central Banks, keeping rates low to boost growth at the expense of future stability, is becoming unsustainable. With debt burdens busting at the seams, investors will soon be demanding higher rates on bonds and policy-makers cannot lower rates further.

Not only has the Federal Reserve manipulated the financial system for three decades, but it has irreversibly weakened U.S. labor competitiveness. The graph below shows average annual labor productivity growth in the United States, on a five-year rolling average, from 1985 to 2015. Continuously lower rates prop up businesses that should be allowed to fail, meaning workers stay in dead-end industries supported by easy money policies. Boosted by the tech revolution in the 90s, labor productivity growth has returned to its decline and is now below 1% growth per year. 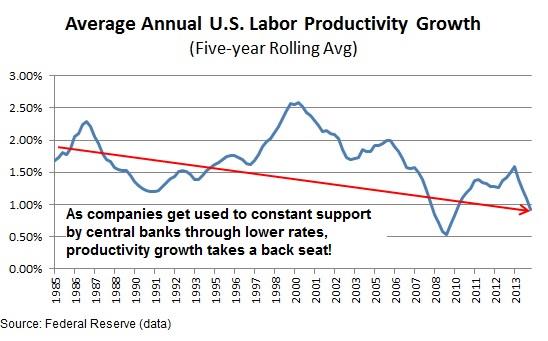 At this point, there is no way out for central banks and really the entire global financial system. According to the BIS report, the average government debt in “advanced” economies is expected to reach 120% of GDP this year and just keep ballooning. Debt will reach nearly 280% of GDP in Japan by 2020 and 90% in the United States.

Central banks will need to continue issuing more debt and pumping more cash into the system to keep rates as low as possible to support debt burdens. Rates stuck near zero won’t be able to juice economic growth as it has and investors will stampede out of all government debt. The result could be complete financial and political collapse as governments are unable to fund themselves and lose the confidence of the markets.

On a global level, Greece is taking center stage as the poster child for decades of monetary manipulation, but U.S. investors should look closer to home for a sign of things to come. Puerto Rico and its $72 billion debt is just a drop in the $3.6 trillion municipal bond market ocean. The Federal Reserve will not be able to lower rates further to prop up shaky state or local issuers, and defaults will fall like dominoes.

What Can You do Before the Next Collapse of the Financial System?

The next collapse of the global financial system could make the 2008 nightmare look like a minor hiccup. Financial assets like stocks and bonds will lose all value as investors lose faith in anything not backed by a real asset. Your first step in protecting yourself should be to understand your IRA transfer options and the greater flexibility in investments. Most 401k plans allow you to invest in a very limited range of stock or bond funds, all of which will be worthless when the system crumbles.

Simply cashing out from your 401k isn’t a solution because of the government’s punitive 401k withdrawal rules. You’ll pay a 10% withdrawal penalty as well as get hit with income taxes on the amount. Transferring the account into an IRA plan gives you greater control of the money and investment flexibility in gold, real estate and other real assets.

You should also consider a Roth IRA transfer for some of your retirement assets. The only option for the government when the system collapses is to force citizens to foot the bill. Taxes could increase significantly and you need to protect yourself ahead of time. Rolling some of your money into a tax-sheltered Roth account will provide tax-free withdrawals in retirement.

The bond market and the entire global financial system has been playing on borrowed time for the past 30 years. Ever lower interest rates to fund wasteful government spending and corruption is a heavy bill about to come due. When it comes, it will be swift and will leave nowhere to hide. The only way to protect your assets is to proactively take control with an IRA transfer and take shelter in assets that will hold their value.