Detroit sounded the alarm when it became the largest municipal bankruptcy in U.S. history and Puerto Rico is about to top the record. Underfunded pension plans across the country are causing massive cuts to public services and it’s about to get much worse.

Public pensions in the United States were underfunded by a staggering $968 billion in 2013, and increase of $54 billion during a year when stock market gains should have closed the funding gap.

Pensions have been able to stay afloat through questionable accounting but the time-bomb is about to explode. In fact, one legendary investor just proved that the pension system may collapse within the next ten years. 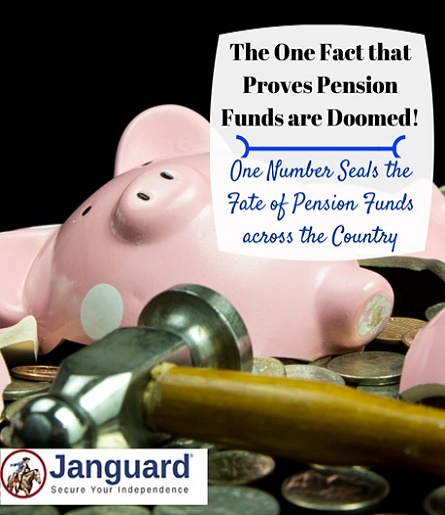 Pension administrators are hoping that economic growth and investment returns help to stay solvent. At the start of 2016, public pension funds were using an assumed 7.68% annual return on investments to show solvency.

Yesterday’s post looked at Vanguard founder Jack Bogle’s forecast for returns on stocks and bonds over the next ten years. Bogle is one of the few big money investors to be consistently right on the market and has used one formula to forecast returns for 25 years to eerie accuracy.

Bogle is forecasting stock returns of just 6% and bond returns of 3% over the next decade.

Instead, pension funds are looking at a return of just 5.16% over the next decade. The Federal Reserve reports total pension fund assets, including private and public, to be $7.68 trillion at the end of the third quarter 2015. A decade of missing the annual return target by 2.5% becomes a hole of almost $3.4 trillion on top of the nearly $1 trillion gap that already exists.

What the Pension Funds Doomsday Means for You

Even those not enrolled in a public pension fund will feel the pain of the pension fund doomsday. Public services could crumble as cities seek the only way out through bankruptcy. The Pension Benefit Guaranty Corporation (PBGC) will likely fold under the weight of massive defaults.

The economic effects will be felt across the nation on a financial crisis that could dwarf the 2008 crisis.

The only safety will be in direct control of your own retirement assets. Even retirement plans in seemingly safe 401k accounts may be at risk as Corporate America buckles under economic strain. Investors need to understand the rules for a 401k transfer to an IRA account. Individual retirement accounts offer more flexibility and control of your retirement investments, including investments in alternative assets.