Our daily lives keep us so busy sometimes that it can be difficult to see the trends staring us right in the face. Our staff of writers here at Janguard works daily to bring you all the top stories that affect your retirement planning and investments.

We sat down recently as part of our annual review to talk about how to best serve our clients. Talking about some of the biggest headlines of 2015, a trend started to emerge that scared us all into action. Below is a collection of some of the top headlines of the year and where we may be heading into the new year.

This trend has shocked us into action and we hope that it will open your eyes as well. 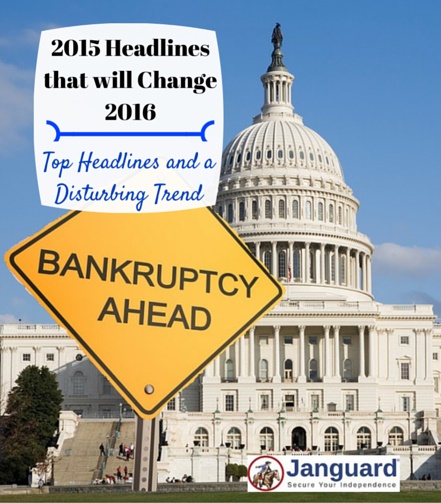 Headlines of 2015 that will Change your World

Government waste and unsustainable debt is nothing new but several of the top headlines of 2015 caught our eye as particularly ominous. We have already seen several instances of multi-billion dollar defaults in the bond markets and Washington has no motivation to end the cycle of tax and spend. It may just catch up to them in 2016.

$82 Trillion Bond Market: The 30-Year Time-Bomb is about to Explode

Detroit’s $18 billion bond default should have been a wake-up call to the financial markets. At the time, the Federal Reserve was deep into its monetary manipulation so nobody thought to question the underlying causes of the largest municipal bankruptcy in U.S. history. The path to government insolvency has been paved with wasteful spending and could be about to explode.

The Federal Reserve started raising rates this month for the first time in nearly a decade. Rising rates will end a 30-year era of easy money through debt issuance. Until now, local governments could spend all they wanted and just fund it with cheap money from bonds. Higher rates mean the $39 trillion U.S. bond market could snap shut, leaving cash-strapped municipals out of options.

Further manipulation by the Fed may not be possible for fear of risking what little credibility it has left. It’s only option is to let the whole system collapse to justify another round of monetary stimulus and lower rates.

Speaking of municipal bond defaults, Puerto Rico could soon dwarf the default we saw in Detroit. We took a look at the government’s $73 billion in bonds last July and found it’s not a matter of if the island defaults but when.

Think all the talk of municipal defaults is being blown out of proportion? Even the Governor of Puerto Rico, Alejandro Padrilla, admits that the island is, “insolvent,” and, “can no longer pay its debts.” The U.S. territory owes its debt to pension funds, banks, insurance companies and across the spectrum of investors. Only California and New York have more debt and a default here could be the wind that causes the entire house of cards to come crashing down.

Congress finally was able to pass a budget keeping the government open but not before the White House tried to pass through its agenda of higher taxes. President Obama’s initial budget proposal included more than 20 new tax increases costing tax-payers more than $2 trillion.

Most of these were stripped out by Republicans in Congress but the path is clear to higher taxes in the future. The government has already raised the spending caps for 2016 and 2017 without worrying about how they will pay for increased spending.

This is one we were tipped to by 401kRollover.com and a report by Citizens Against Government Waste (CAGW). The Department of Health and Human Services estimates nearly $30 billion in improper Medicare payments are made each year. These include sending funds to the wrong recipient, sending the wrong amount of funds and not checking that all the required paperwork was turned in to justify the payment.

One of the President’s most overt ways of paying for huge federal deficits has been to raise taxes on investors. His budget proposal called for a flat tax of 28% on capital gains rather than the sliding scale between 15% and 23.8% dependent on income. Heading into the last year of his term, there is no doubt that he will try to push as many of these tax hikes through as possible. 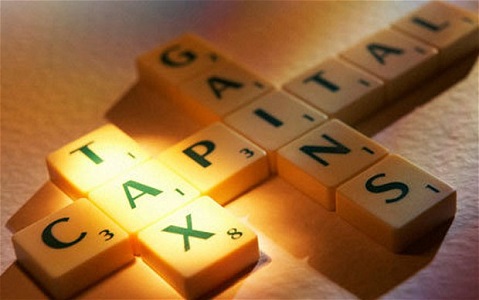 We may not be able to avoid many of the financial hardships coming. Municipal governments look ready to send the bond market into a tailspin with massive defaults. Washington cannot (or will not) control its wasteful spending and chooses the easy route of raising taxes.

The only solution is an individual one of protecting your assets from taxes. One of the best ways to protect your retirement savings is to convert your account to a Roth plan. Unlike a traditional IRA, withdrawals from a Roth plan are not taxed as income. While nobody can exactly predict the level of taxes in the future, the path to higher tax rates is almost certain. Having at least part of your retirement savings in a Roth plan is the only way to protect some of your wealth.